Something every developer should know: when you develop a project that has to go in production, it is good to control the version of the dependencies you use. Embed the libraries you use, or at least set fixed version numbers in your favorite dependency management tool.

It can help to avoid lots of bugs and headaches.

Here is one of the weirdest bug I had. I struggled a lot to find its cause, only to understand the bug was not in my code, but introduced by a third party dependency of which I lost control.

I work on some code actually deployed in production. I manage several environments (let’s restrain to production and preproduction) with automation tools so I can be sure the code is ready to go in production.

Needing an awesome network protocol library - let’s call it awesome-library - I started one of my favorite npm command at the beginning of the project:

That was my mistake.

For those who use other tools or languages, this simply tells I want to add the awesome-library as a dependency in my project; each time my automation tools deploy the code, this dependency will be installed (--save option).

Later on, I needed to add a new feature in my project. I implemented the feature. Did some tests. Put it in preproduction. Seeing it was fine a whole day, it was deployed on the production environment the morrow.

2 hours later, the production platform was acting weird and I had network troubles.

Fortunately, I have the means to do a quick rollup, so the previous version was immediately restored.

Searching for the Bug

I had logs. Good practices for production. The code I added was so simple and minimal that I could not understand how it could have so drastically changed the behavior of the app. However the logs were showing some problems coming from the use of awesome-library and I actually did some modifications in some code using that library.

But why a behavior so different between my preproduction and production environments?

I immediately redeployed the code in one of my testing environments. Here is the very weird timeline of my tests.

I finally had the intuition of checking the commit logs on GitHub of awesome-library. Good intuition. I discovered 2 things:

If we add the timeline of the awesome-library evolution, the full timeline view becomes: 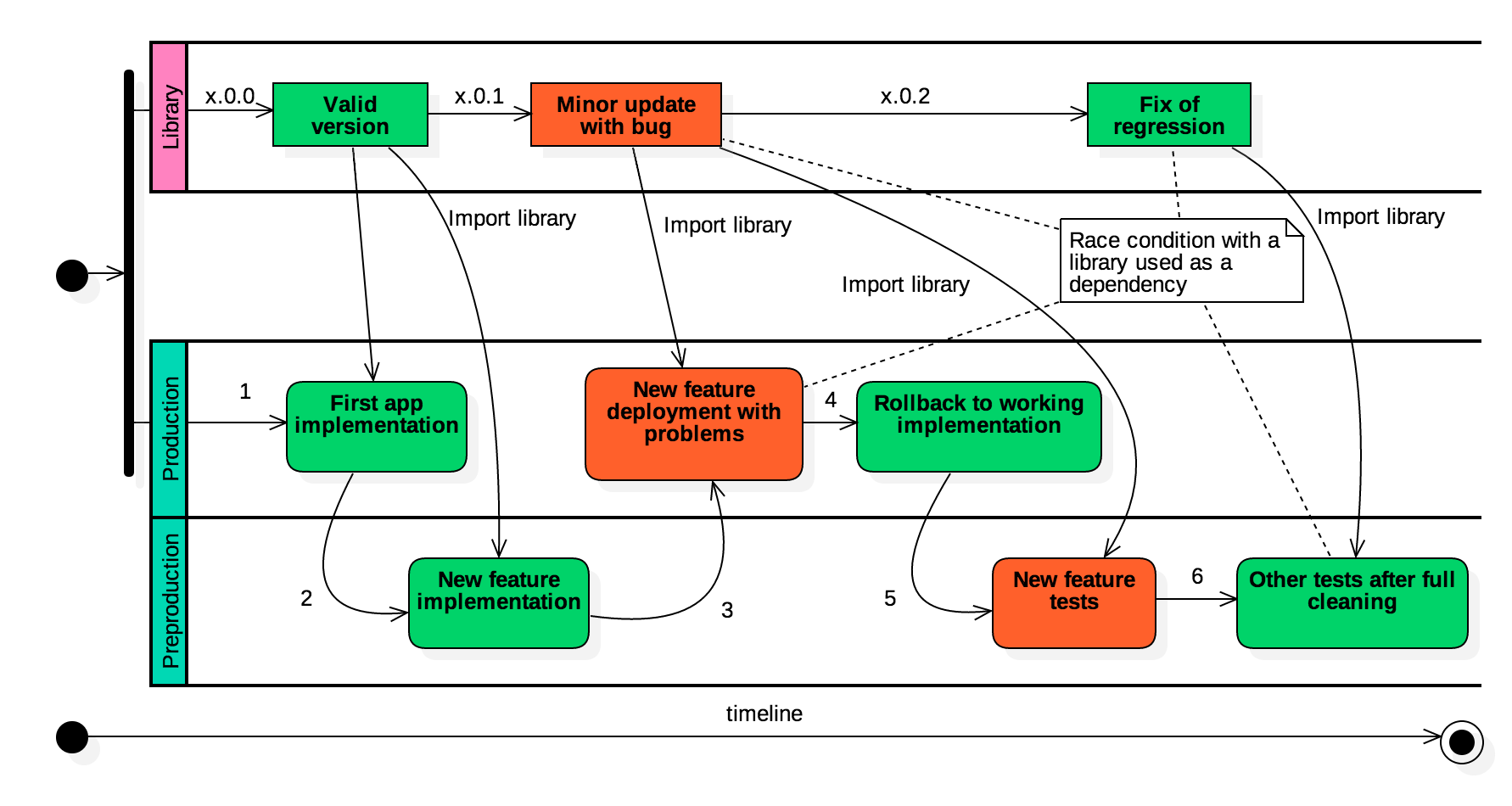 Full timeline of the problem

When a fresh installation of my app is done, awesome-library is automatically pulled from GitHub.

My first implementation was using version x.0.0 of awesome-library. And all was fine. Unfortunately for me, just before I decided to put my new code in production, version x.0.1 of awesome-library was available - with a nasty bug in it - and my build system automatically fetched this new version!

While I was doing some tests on my code to find the bug, the maintainer of awesome-library corrected the regression and published version x.0.2. Since some of my tests (with the old AND new version of my app) were done with x.0.1 and some others with x.0.2 it was difficult to understand what was happening.

How can that happen? When a npm install --save is done, the dependency is added in the file package.json using this notation:

According to npm documentation, the carret ^ means that higher minor or patch numbers are allowed. Each time you do a fresh install with a fresh npm install command, npm downloads an updated version of the library.

Allowing an automatic upgrade for the patch number in a SemVer-compatible library is not a good idea since a bug fix can also be a source of new bugs.

It can be noted that once npm install is executed, typing it once again does not update the already installed library - unless npm update is executed.

We could try to avoid headaches by adding the --save-exact option to the npm command:

When this option is added, package.json becomes:

The caret disappears, and the library version is definitively set-up.

And the nightmare continue.

How this problem can be solved? There are generally 2 possibilities:

The second option is better, and actually some dependency tools for other programming languages do that by default.

npm provides a special command that can help:

It generates a npm-shrinkwrap.json file that contains the hierarchy of all your dependencies and their version at the time you use the command.

The process is simple:

All the hierarchy of dependencies becomes known. A production environment must be as predictable as possible.

yarn is a replacement for npm. I have little doubt it will completely replace npm in the future since it features many interesting improvement as compared with npm, while using the same library database than npm.

yarn produces a yarn.lock file similar to npm-shrinkwrap.json which details all the transitive dependencies. You must add your dependencies using the yarn add command: it will automatically install them and will also update the yarn.lock and package.json files.

This approch is better since you do not have to think about fixing your dependencies: yarn will do that for you automatically.

Just do not forget that as for npm-shrinkwrap.json, yarn.lock is a file that must be shared between developers, you must not ignore it in your source version control system.